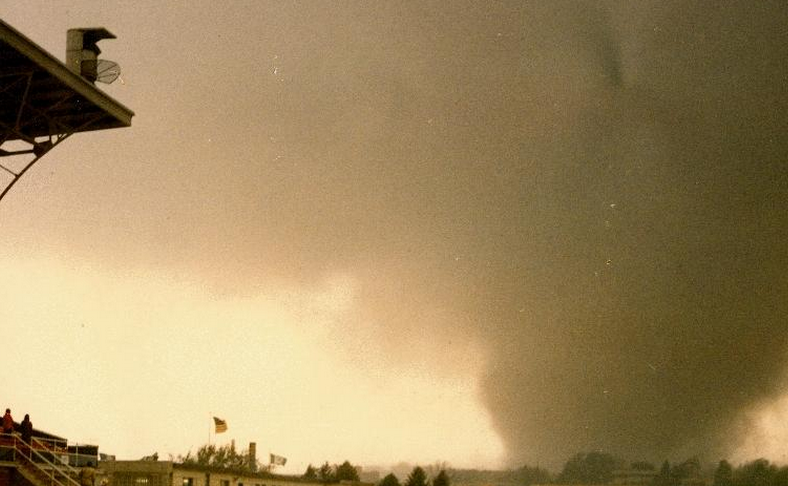 39 years ago may 6, 1975 Omaha, NE experienced a mysterious quiet sound and then the major city was hit by an f4 tornado. A family getting ready for supper noticed the strange weather throughout the day.

Humid and quiet not a single bird chirp. Back then the weather alerts were not as advanced as they are today in the year 2014. All the television said was to prepare for potentially bad weather. The Doppler radar was not anything near as descriptive as it is today.

A mother making pigs in a blanket and Kool-aid for the kids wanted to do a practice drill. The oldest daughter Tammy was to grab the dog. The second oldest, was her son Scott, he had to grab the cat and the youngest, five year old Tracy was only to follow her older siblings… Mom, Linda had that under control she was going to help Tracy.

If the weather escaladed They all had a job and they were to go downstairs into the basement and get under a mattress. After their practice drill, supper was served. The sky turned green and seconds later the sirens sounded!

A couple bites of food and all hell broke loose. It was utter chaos The dog freaked started chasing the cat Tracy was hysterical and poor Scott fell down the stairs. Ken the husband was out on a job and was heading home. He didn’t know why everyone was parking under bridges and kept driving.

Linda’s mother was working at Khol’s at the time and says she seen three tornados collide into one. This monster began in Sarpy county and finally lifted over the Benson area Westgate was completely demolished. Three lives were taken. 300+ million dollars in damage. Tonight we may see the same.

Other Articles Of Interest:
1975 Tornado Omaha - Force 4 Tornado - Take Cover!
Air Force Mary Jane The Heart Of A soldier
Stem Cell Break Through - Lemons and The Fountain Of Youth
Who Is John Galt? Who Is Ron Abboud?
Super Humans Where Are They?

Other Videos Of Interest:
1975 Tornado Omaha and Others