The generic drug dichloroacetate is an orally available small molecule that, by inhibiting the pyruvate dehydrogenase kinase, increases the flux of pyruvate into the mitochondria, promoting glucose oxidation over glycolysis. This reverses the suppressed mitochondrial apoptosis in cancer and results in suppression of tumour growth in vitro and in vivo. 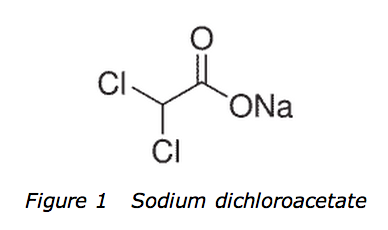 Unfortunately, there was no support forthcoming from pharmaceutical companies for clinical trials because DCA is a widely available chemical and cannot be patented. Nevertheless, it had been in use for more than 30 years with a good safety record, and there was a strong case for testing the drug in human cancer patients.

With funding from private foundations and public donations as well as the Canadian National Institutes of Health, the team carried out the first clinical trial on five patients with glioblastoma (a fast-growing malignant brain tumour nearly always fatal), and the results were published in 2010 [2]. Of the five patients treated, one of the three with terminal cancer died after 3 months on DCA, but the rest were clinically stable at month 15 of DCA therapy, and still alive at month 18. Three of the patients showed some evidence of the tumour shrinking on magnetic resonance imaging. The results were promising.


Canadian scientists tested this dichloroacetate (DCA) on human's cells; it killed lung, breast and brain cancer cells and left the healthy cells alone. It was tested on Rats inflicted with severe tumors; their cells shrank when they were fed with water supplemented with DCA. The drug is widely available and the technique is easy to use.

In human bodies there is a natural cancer fighting human cell, the mitochondria, but they need to be triggered to be effective. Scientists used to think that these mitochondria cells were damaged and thus ineffective against cancer. So they used to focus on glycolysis, which is less effective in curing cancer and more wasteful. The drug manufacturers focused on this glycolysis method to fight cancer. This DCA on the other hand doesn't rely on glycolysis instead on mitochondria; it triggers the mitochondria which in turn fights the cancer cells.


You can access the original research for this cancer here: http://www.sciencedirect.com/science/article/pii/S1535610806003722

The low-carb, high-fat ketogenic diet can replace chemotherapy and radiation for even the deadliest of cancers, said Dr. Thomas Seyfried, a leading cancer researcher and professor at Boston College.

In an exclusive interview, Dr. Seyfried discussed why the ketogenic diet has not been embraced by the medical community to treat cancer despite its proven track record both clinically and anecdotally.

"The reason why the ketogenic diet is not being prescribed to treat cancer is purely economical," said Dr. Seyfried, author of Cancer as a Metabolic Disease. "Cancer is big business. There are more people making a living off cancer than there are dying of it."

Radiation Therapy Is a Gravy Train for Hospitals

According to Seyfried, the medical community is reluctant to publicly acknowledge the efficacy of the ketogenic diet for preventing and treating cancer because doing so would cut off the massive streams of revenue hospitals generate from chemotherapy and radiation treatments.

It's a simple economic issue. There's no money in it for the hospitals, doctors, and drug companies to prescribe a ketogenic diet when they can make hundreds of millions of dollars from the standard of care. Radiation therapy is a huge revenue generator for hospitals."