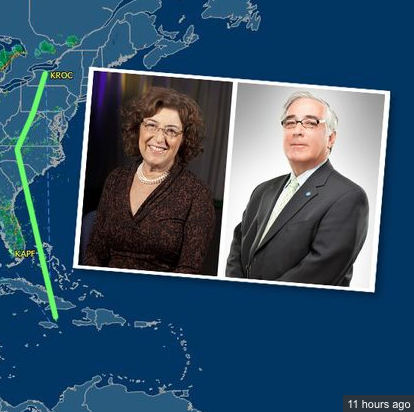 Larry and Jane Glazer were the only passengers aboard a private plane that took off from Rochester yesterday morning bound for Naples, Florida, authorities said. The unresponsive aircraft stopped responding to radio calls at 10 a.m. ET, as the plane that was tailed by fighter jets until it reached Cuban airspace before crashing off the coast of Jamaica according to a statement from the Federal Aviation Administration.

Larry Glazer - who died alongside his wife, Jane, on a trip from New York to Florida

Rochester Mayor Warren stated in a letter: "The City of Rochester has lost two heroes," "It is difficult to put into words how much Larry Glazer has meant to our community. His efforts helped to lift our spirits and restore our sense of optimism. He has been a treasured friend and partner."

The company also holds 300 acres of property in central Florida, according to its website.